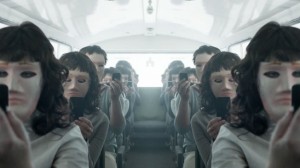 “It has become appallingly clear that our technology has surpassed our humanity”. Albert Einstein.

When Internet came to our lives, our eyes became wide open – there are no boundaries, time limits, control. The Internet became our home, life, best friend and oracle. Technologies turned people’s lives upside down and time started to run faster.

Modern medical technologies have enabled to cure thousands of people, to cure incurable ones, to give a chance for those who had no chance before. The Internet has abolished the borders, erased distances and long waiting hours, but at the same time it eliminated ability to communicate, to think independently or to enjoy the world around us. Technologies have a lot of advantages but on the other hand, it also have some disadvantages. “Black Mirror” series reveals the dark side of technology that presents its future vision which may seem extremely bleak.

“Black Mirror” is a British television series created by Charlie Brooker claiming that this drama is about our lives that we live now and how we will live after 10 minutes. When the series was launched in 2012, it was appreciated by critics and won an “International Emmy” award as the mini-series on TV. It is interesting that the “Black Mirror” has become very popular in China and was the most discussed series in 2012.

A scene from “Black Mirror”

Like the majority of British series, the season in “Black Mirror” also consist of three parts. The duration of one part fluctuates between 40 and 60 minutes. Each part shows how series characters are influenced by technologies and consumerism society. It is a perfect sci-fi satire that reveals how any of us can lose values and dignity with the aid of harmful dependence on technologies. “Black Mirror” makes a number of references to Twitter and Facebook fans, as well as video game fanatics, but these references are certainly plunging into reverie.

To talk about the series as a whole is really complicated. Each part is completely different and is not related to each other. In one part, woman tries to replace her dead husband with a robot, which has the same appearance and his personality is revived using the posts and comments taken from social media. After some time she realizes that her husband was much more than created robot and being in great pain tries to correct her mistake. The last part of the first season so intrigued an actor Robert Downey that he proposed a motion to create a movie. This part is like a metaphor telling that we spend much more time sitting next to TV’s or computers rather than living in a natural environment. Each part has its moral and different kind of view, but the main idea of this series is that we too often let technology affect our lives and we forget that the most important thing is humanity.

A scene from “Black Mirror”

The Features of the Series

There is no doubt that this series is wonderful as well as the idea. “Black Mirror” tone is dark and pessimistic. It is made using a lot of cold blue color in cinematography and atmosphere making claustrophobia’s effect. Each part ends with a note of sadness or condition, which can be called “best of the worst”. No complaints against the director, script writer, who really deserve applause.

Actors made a great job and they are experts in their field. Many of them can be seen on other British movies or series like “Downtown Abbey”.

The best thing is that less than in one hour the creators of the series involve us in the series that we start to believe in these actors, we feel sorry for them and also see ourselves in them.

“Black Mirror” is really gripping, shocking and revealing series. Something that television needed long time ago. Brits continue to surprise us with their insights and cunning. Unconventional solutions, science fiction, drama, mystique – everything can be seen in every “Black Mirror” part. We honestly recommend this series, if you are interested in the future of humanity or at least once a day you sit down and browse Facebook.