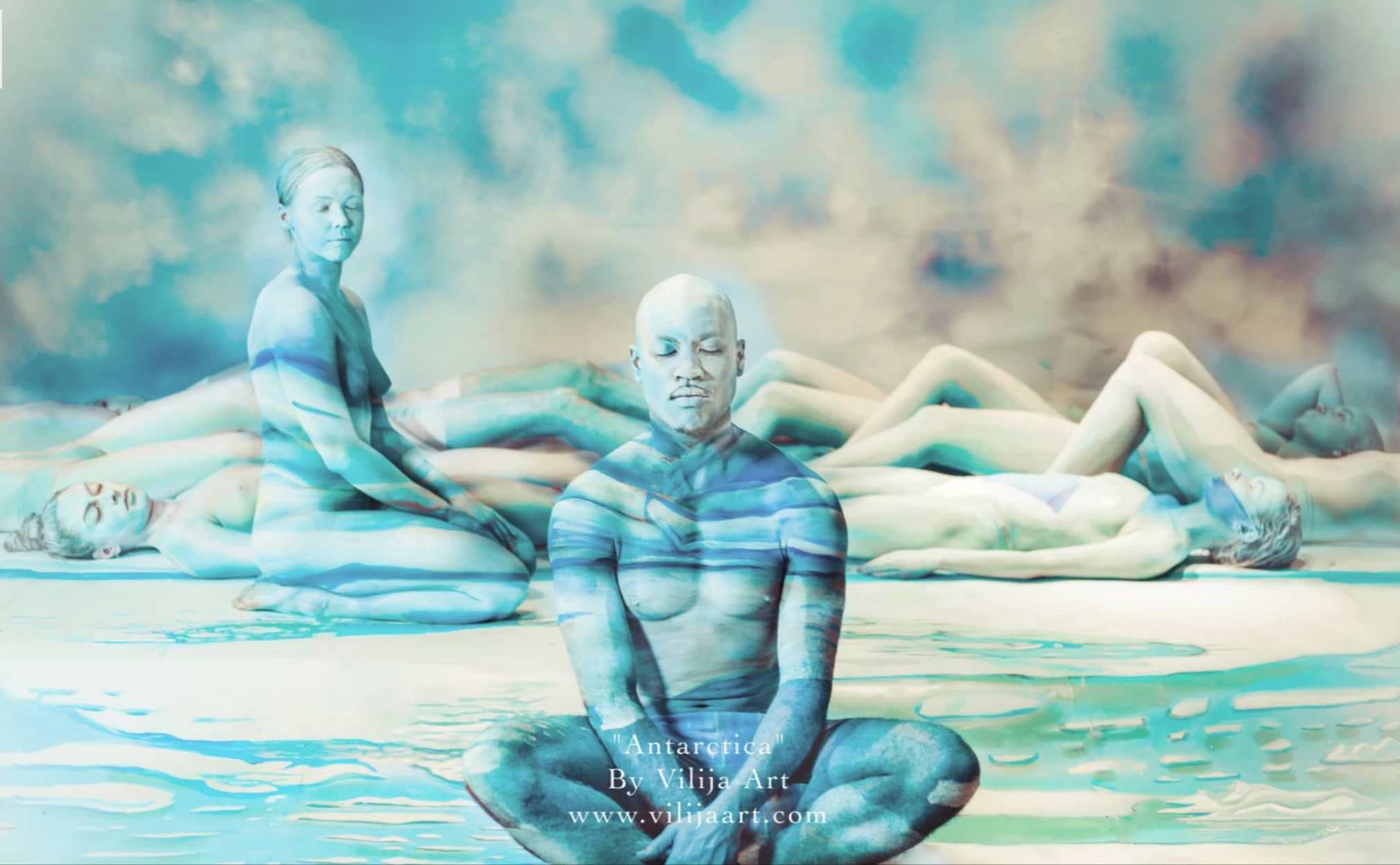 Vilija Vitkutė is a Lithuanian artist who creates marvelous body paintings. Her work speaks about nature and how important it is for us, humans. She is a body painter, producer, director of various music videos and photographer. In “The Antarctic” project she transformed body painted dancers in to different forms of Antarctic nature.

“The Antarctic” is a message of an Antarctic nature in its balance that we, humans, have to protect. Antarctica melts because of people’s actions and if it melts for good, people will melt with it.

In her work V. Vitkutė uses various art styles, but her favorite way to express herself is visual art. The art she creates in her body paintings have no sketches, but all of the work she does is very detailed, meticulous and precise. Every object has their own story and makes the viewer think of the nature and his or her actions.

In “The Antarctica” V. Vitkutė painted over 20 dancers in Åsa folkhögskola and created bodypainting illusion and camouflage. She transformed people in to mountains and glaciers, melting in each other and in different forms of water that can be seen in Antarctic nature. All of the models finds the artist themselves. They are brave, full of ideas and creativity which connects them to V. Vitkutė. The artist once said that she likes to meet and become friends with the models before the bodypainting process – they go get a cup of coffee, tea or go to some kind of a concert. She likes to talk to them, get to know the models. The relationship they build last longer than the art process, she said that she likes to keep in touch with people that helped to create her art.

The artist says, that she loves and cares about the nature very deeply. It is her biggest inspiration. And for sure, the signs of the nature can be found in all of her work. People who do not love nature and destroys it makes the artist bitter and disappointed. According to her, humans have to become friends with the nature. In this recent project she used Antarctic nature, a place in which she have never been, but dream of it a lot.

V. Vitkutė is fearless and she likes to challenge herself. She tries to get out of her comfort zone and search for new ideas and inspirations by travelling.

According to V. Vitkutė, the Antarctica looks like it is not a place for a human, because it is so big, covered in ice and snow. Almost all of its landmass is covered in vast ice sheet. It is a home for the animals, whales, seals, penguins, the nature there is not touched by any human hand.

Antarctica is the coldest and least populated continent. Unfortunately, the beauty of the Antarctic may change. People want to bring the industry there, which would lead to a big damage. Study shows that Central West Antarctica is one of the fastest-warming regions on Earth.

With her project V. Vitkutė invites everyone so sign a petition for Protecting Antarctic Ocean.