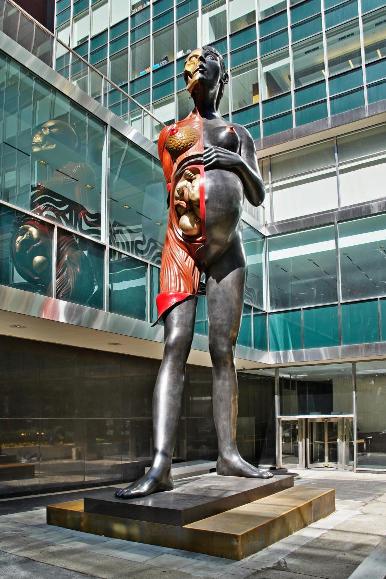 Damien Hirst is one of the most famous modern art representative nowadays, who frequently shocks ordinary people with his pretentious works and demonstrates to the world his point of view about existence and death in very peculiar ways.

To the audiences this artist, who earns millions, introduces a dead cow head with dozens of flies in big glass cube – flies live in it and feed on a head meet, or a preserved shark and skull with real diamonds… So, let’s meet the eccentric Damien Hirst.

First of all – a little bit of the biography. Damien Hirst was born in Bristol in 1965. He studied at GoldsmithsCollege in London and first came to public attention in 1988 when he conceived and curated “Freeze,” an exhibition of his works. After that pivotal show, Hirst has become one of the most prominent artists of his generation. Many of his works are widely recognized, from the shark suspended in formaldehyde to the later works such as the skull with the real diamonds named “Memento Mori” (2007). It is interesting that this work is made of 18 years old human skull, but only one real part left of it is teeth. The art historian Rudi Fuchs has said about the latter, “The skull is out of this world, celestial almost. At the same time it represents death as something infinitely more relentless. Compared to the tearful sadness of a vanitas scene, the diamond skull is glory itself.”

Damien Hirst lives and works in Devon and London. He was included in the 1992 Young British Artists exhibition at Saatchi Gallery, London and in 1995 he won the Turner Prize. Many personal exhibitions of this artist have occurred since then.

What he is creating about?

Throughout his works, Hirst approaches the ideas about existence and death in a challenging way. He is questioning our awareness about the boundaries that separate desire and fear, life and death, reason and faith, love and hate. Hirst uses the tools and iconography of science and religion, creating sculptures and paintings whose beauty and intensity offer the viewer insight into art that transcends our understanding of those domains. “There [are] four important things in life: religion, love, art and science,” the artist has said. “At their best, they’re all just tools to help you find a path through the darkness. None of them really work that well, but they help. Of them all, science seems to be the one right now. Like religion, it provides the glimmer of hope that maybe it will be all right in the end…”

Damien Hirst is well known for the art installations – glass cubes in which are preserved different animals, such as cows, sheep and shark. And lets again look at the cow’s head with dozens of flies in the glass cube. It is one of the most criticized and interest art installation named “A thousand years“. The artist wanted to display a circle of life. Audience could observe how one of the flies dies in the electric flytrap and the other reproduces and feeds on and in this way maintains the rhythm of the circle of life.

Damien Hirst doesn‘t restrict his art only to the dead creature installations, you can see many of his paintings, photos, created plots and even directed clips. It is interesting that author doesn‘t create alone. He has many assistants, who do jobs that consume lot of time and are “non-artistic“. For example, the famous painting with a lot of colored circles, which later became part of the interior and design, was accomplished by one of his assistants. According to the author, “I painted first five circles and the later job I gave to the Rachel. I couldn‘t be fucking asshole and paint those spots. It is shit against the…“. Because of this, his works often cause discussions about authenticity, but the author argues that the only thing that separates the painted spot of his assistant and himself is the money.

Damien Hirst is often called a simple businessman, because he charges millions for his works. However, popularity of this artist in the whole world clearly reflects in his bank account.  One of the first of his sculptures “Hymn” was sold for 1 000 000 pounds.

In 2000, New York started Damien Hirst exhibition “Damien Hirst: Models, Methods, Approaches, Assumptions, Results and Findings” which in 12 weeks was visited by 100 000 of people and every single one of his works was sold out.  Hirst’s property in 2003 was evaluated for 35 million pounds. So, we are talking about very successful artist.

Of course, Hirst’s works are not cheap. He once upon a time created tiger shark that was sold for American collector for 6.5 million pounds.  During the auction in 2007, for his work „Lullaby Spring“ – 3 meters width open closet with more than 6000 sleeping pills spread out in it – he earned 19.2 million JAV dollars. And again, for his famous diamond skull artist has received 50 million pounds. So, what else can critics who argue that modern art is junk tell?

Naturally, there are persons who criticize Damien Hirst. He is often blamed for plagiarism and as the art critic Robert Hughes says, Hirst is even responsible for the degradation of the modern art. Critic also says that price is not the only thing left that expresses the value of the art.

However, artist’s bank account that is constantly full of money proves that his art has a wide audience and there are people who think that his works are worth a lot of money. And when artists speaks about money, he says that, “Money is the key to the world. Although for myself, however, more important thing is admission that it gives.”