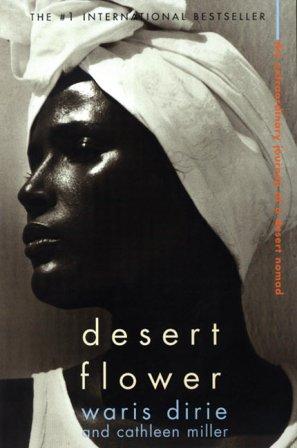 One morning little girl Waris was given to a gipsy. “I felt when my parts of a body, my sexual organs, were cut off. I heard a sound of a blunt blade while my skin was cut on and on. Everything ended so fast just because I fell down in a faint. When I came to my sense, I thought that the nightmare is over but the worst part has just started. My eye band was slipped and I saw a murderess. She was next to me and had a pile of thorns of acacia. The murderess used these thorns to pierce my skin. Then she passed a strong, white yarn through these punctures and sutured the wound. I did not feel my legs but the pain between them was so strong that I wanted to die.”

Later on the wound healed up and looked like a zip. “Genital was as bricked wall so that no man could insinuate before the wedding night. When comes the right time, the husband cuts this “wall” with a knife or intrudes by force.” (A fragment from a book)

“According to folk wisdom in Somalia, the body parts which women have from their birth between the legs, are evil and they are not completely clean. That is why this evil has to be eliminated. The clitoris, labia minora and the greatest part of labia majora have to be cut off. Compacted wound is sutured. Stays just a scarf instead of genital” tells Waris Dirie, an author of a book.

When Waris was 13 years old, she ran away from home because she was scared that her father would marry her to an old man who has promised five camels for this wedding. Waris intended to find mother’s sister living in capital Mogadiscio, though nor she has been to this city neither has she seen her aunt. Day and night she was running through the tropical desert. Then Waris travelled with the strangers. She was almost raped and pulled apart by a lion but Waris managed to find her relatives and escape to London.

This shocking story is being told by Waris Dirie in a book “Desert Flower” (Waris, author’s name, means desert flower). It is an autobiography based on actual events. This uncommon and confusing story about a girl from Somalia was a real sensation for a world. The book is divided into three chapters. The first one tells about Waris’ childhood and escape from Somalia. The second one is about the life in the West and her modelling career and the third one chapter is about Waris as an adult woman who became the first woman started to fight for woman rights in Africa in order to protect little girls from this torment (“I believe, God gave me a voice to speak for other little girls.”)

After escape to London, Waris started to work as a cleaning lady at McDonald’s where she was noticed by a famous photographer who offered her a job. Waris received an international recognition in modelling industry. Later, she moved from London to New York and became a super model. While being the first African model, Waris signed a contract with cosmetics firm Revlon. All these alterations changed her life. Magazine covers, couple of films. Waris found her love in New York and now she has a family. Together with her husband Waris is raising two sons.

“I am born under a lucky star” claims Waris Dirie. Some little girl in African bush goes long miles barefooted to give water to goats feeling such a strong menstrual pain that she can hardly walk.

65 editions of a book “Desert Flower“ were published. In many countries this book became a bestseller. In Germany this book stayed in the first place for 120 weeks, 11 million copies were sold. Waris Dirie got many awards and in the year 1997 United Nations has appointed her as an ambassador to protect the rights of African women. A couple of years ago a movie adaptation was released and received an award of Best European movie.