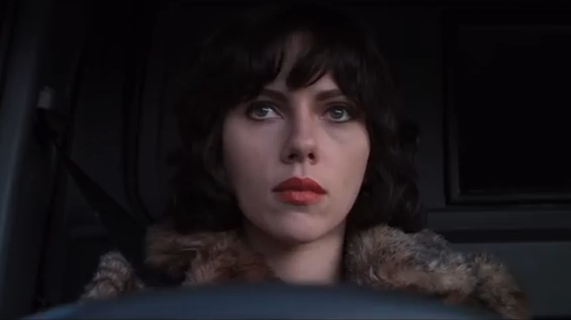 British filmmaker Jonathan Glazer’s new work, ‘Under the Skin,’ ultimately poses as a skin of its own, encapsulating one’s mind into this psychological maze of the screen.  With delicately lighted visuals and a beating soundtrack, the film moves along at its own heartbeat, pacing throughout the Glasgow night and greater countryside and inviting audiences along for the journey.

Filmed in and around Scotland, ‘Under the Skin’ tells of an indeterminate organism’s discoveries of humanity against the backdrop of a modern society. Laura (Scarlett Johansson), the adopted name of our protagonist, desperate seeks the answers to perhaps the human universe’s greatest question: what does it mean to be human?  By fitting into a human skin, Laura observes humanity from a secretive point of view, walking the streets, visiting clubs, and driving hitchhikers around town. To others, she is just another beautiful woman, but to the unlucky few who think they are taking her home for the night, they are utterly mistaken.

Over the course of her story, Laura attracts men of all kinds: football fans, junkies, and clubbers alike. In her attempts to seduce men (and she doesn’t fail), Laura brings all to a mysterious location which opens up into a sea of black ooze. She waltzes across unscathes on the surface, while men sink into the goo, unexplained by rational thought. Metaphorically speaking, she’s engulfed them into a pit of their own desire, only to left behind wanting what they don’t actually know isn’t human. But, when unsatisfied by her escapades, she travels north to the countryside in an attempt to experience a deeper human connection than casual sexuality.

After accepting the good graces of a proper ‘Highland hospitality,’ Laura embarks upon a short romance with a man, staying in the home and sharing a domestic experience, taking walks through the forest and visiting majestic castles. This new lifestyle furthers her understanding of humans and their lifestyles, but it ultimately forces her to confront the ultimate question and answer to which she seeks: what is below the surface?

Glazer’s film moves slowly stretches its narrative across a period of a few days, but his tone and treatment of the story give it a mystical feel. Rarely at any point do we notice objects that ground our viewing of the film in modern reality: brand names, local sights, familiar icons. Further, the glossy nature of the landscapes of Scotland and the high effect lighting on Laura keep her in prime focus not only in the image frame, but also in our minds while watching.  Glazer is similarly attempting to seduce our minds into his tale of discovering the essence of humanity.

Coupled with the stunning visuality, Mica Levi’s score provides a regulatory heartbeat to the film’s pace and progression.  Amped up with heavy sound editing for sequences in Laura’s liminal alien spaces for seduction, the thumping and crashing sound effects add a auditory layer of ambiguity to the overall feel and tone of the film.  One thing for sure, Glazer’s film is a perceptual treat for the eyes and ears.

Perhaps Glazer’s greatest achievement comes not in the stylization of his film, but in the aspects of narrative by which he teases audiences, giving us only some parts of the larger puzzle. Intercut with Laura’s story are numerous sequences of motorbikes weaving through highland roads. In and out of thick fog, these sequences provide a meta-stroke in between our understanding of Laura’s story, but also contribute to our conceptual understanding of the narrative. We are similarly mystified and confused by an otherworldly being as they are to us. But then again, isn’t that what it means to be ‘alien’?