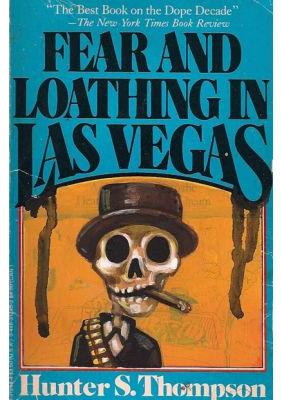 Hunter S. Thompson‘s – Fear and Loathing in Las Vegas: A Savage Journey to the Heart of the American Dream is one of the most significant novels in the history of the American literature and culture.

It is not difficult to understand why once you finish reading it,  it leaves you with many emotions: you want to laugh, you cannot believe what you have just read, you wonder why, you are surprised, you may even get angry, and most importantly – you realize that you have just been invited to one of the most intriguing journeys of your life. Fear and Loathing in Las Vegas invites the reader to experiment with his consciousness and question everything that he knows and believes in.

Two men Raoul Duke, a journalist, and his attorney Dr. Gonzo arrive at 1970’s Las Vegas to cover Mint 400 motorcycle race. However, they soon forget what their initial task was as they start to lose themselves in the hallucinogenic trips caused by various recreational drugs these two friends experiment with. While you read the story you can’t help yourself from thinking – who would dare to do this? Who is crazy enough to pack their cars with various drugs and booze and go through the desert in the rented car? And soon you realize that the characters of this novel are actually very brave men because they dare to take off their human mask.

The preface of this book quotes Samuel Johnson: “He who makes a beast of himself gets rid of the pain of being a man.”. This quote actually expresses the essence of the story. While getting lost in the insane hallucinations Duke and Dr. Gonzo try to escape the cruel realities and emptiness of life but soon Duke realizes that drugs aren‘t the answer either. It is repeated throughout the story  that they are looking for “the American dream” and at first Las Vegas seems perfect for that. However, as they slowly drown in paranoia, they realize that “the American Dream” may as well be dead. Moreover, Las Vegas is shown to be insane city even without drugs affecting your mind. Las Vegas is full of insane people and circus. Duke realizes that “the American Dream” has gone crazy and everyone is hiding their craziness but they are different because their insanity is exposed and pure.

As I traveled through the pages full of fear, absurd, irony and taking chances, I understood that this novel is not for narrow-minded and faint-hearted. If you decide to read this book you have to forget your preconceptions about drug use and American culture. Only then you will be able to enjoy this story as I did.

The story of this novel is believed to be rooted in autobiographical elements. Hunter S. Thompson indeed went to Las Vegas two times with the attorney Oscar Zeta Acosta when Thompson was writing for Rolling Stone magazine. Therefore, the story originally appeared in this magazine as two-part series.

Hunter S. Thompson (1937 – 2007) was one of the most famous American journalist and writer. He started what is called “Gonzo style” – a literary style which fuses fiction with facts. His way of life is best described by this quote of his: “I hate to advocate drugs, alcohol, violence, or insanity to anyone, but they’ve always worked for me.”