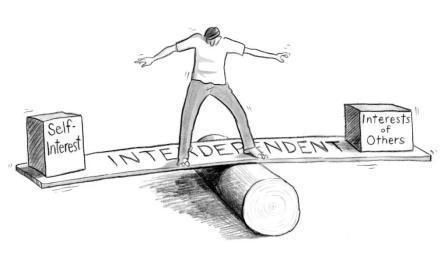 It used to be unbelievable, in these times, to think that major scale war could ever erupt. The mantra told us that we are so interconnected, our economies are to such significant extent linked, capital markets are thriving only due to mobility between all countries and openness to foreign investment, thus the one who dares to wage a war will find itself waiting in the line for bread, milk portions only served for new year’s celebration, investment tap blocked, and prospect of bloody peasants’ revolt due to miserable life conditions.

That’s what we’ve been told, according to prominent interdependence theorists that pampered right after fall of Soviet Union, the end of Cold War, and victory of “immoral” eye for an eye foreign politics. Some googly-eyed scientists indisputably applied rational thinking to all states, yearning for objectivity and neutrality, while dismissing the obvious fact that no state or government-type of bureaucracy is fully rational. Only a naïve fool could suggest such preposterous idea, perhaps getting just plainly absurd once you employ it to think about security of the country.

No war is completely rational. The response to it might be based on specific logic, say, if you fire missiles towards me everyday, I might one day invade your small piece of land to make sure that you won’t have means to do that anymore – that’s something I could understand and support it, although it’s just one of the way to act and it with a bit of twisting the actions can change drastically. I cannot, however, relate to the idea that, on second thought, you’re buying a lot of products of ours, neighbours who support you second that as well, therefore, I better get my hot cocoa, a snuggie, and get into the bunker while you’re having fun, after all, in some way you’re paying for it. My homo economicus nature prefers financial stability and prosperity to higher chance of dying.

In fact, it must be finally understood that those who wage war don’t really operate on rational calculations. Even though some of them try to calculate the risk, this still happens in the boundaries of silliness. Look at the jubilant commentators of foreign policy that cheered at first, for their own reasons, and then laughed at Vladimir Putin’s decision to ban European, American, and Australian imports. Such Kremlin’s decision is incoherent, illogical, destructive, wicked, lousy, weird, and apparently also proud of it.

Moscow is honoured of it, because authoritarian and corrupt regimes don’t think about the common population’s wellbeing. They think about them as much as it serves their needs and end goals. If you honestly think that such action was a “bullet to the foot” for Putin, it means there’s still a lot room for improvement. Banning meat and milk is something that cannot tremble the regime, as high HIV and other venereal diseases’, mortality, crime rate, terrorism, and extreme alcohol consumption didn’t hurt the regime at all these years.

The pink vision of interdependence as a force for stability and peace made the West a poodle whereas Russia is a self-aware pit bull. Netherlands, the country that lost 74 people from attack by terrorist rebels in Donetsk, directly funded by Russian government, instead of leading the Europe to proper confrontation against Russia played safe hand and only ceremonially criticised Russia. Why? Well, that’s fairly obvious. Dutch economy is relying on Russia’s investment and exports, mainly natural resources. Ironically, the greatest sanctions the West produced were enacted by Russia herself.

But that wasn’t supposed to happen, the theorists proclaimed. Why would a country that doesn’t export much, apart from natural resources, would risk the probability of getting isolated and then have their economy collapsed? Again, because belligerent regimes cannot multitask, they are able to pursue only a single goal, which is in Kremlin’s case ­– expansion of the land. Economy and other matters would be just an unnecessary distraction.

The myth of goodness of interdependence between nations is a fallacy. It always works in favour of the villain. When numerous countries decided to cut most of the ties with Soviet regime, the main line was, “what are you going to do without us? You need us, so close your eyes, cross your hearts and align with us.”

I’m not suggesting that countries should commit to the goal of total state-wide autarchy. But what is desperately needed is a change in thought and awareness. Applying same rules and principles to all states, whether some of them are authoritarian, totalitarian, openly sectarian, terrorist funding, is most certainly not going to work in long-term. Quite contrary, having business with risky states, getting hooked on their goods eventually empowers them to act like a drunk retired village bare knuckle boxer in a barn fight who thinks it’s his barn, although it’s not.

Democratic governments should, however, understand that foreign policy isn’t just a seat and the United Nations, or number of F-16 fighters, the power comes from ability to exercise it. Sadly, decades of indiscriminate interdependence increase between nations led to foreign policy becoming weak and laughable.