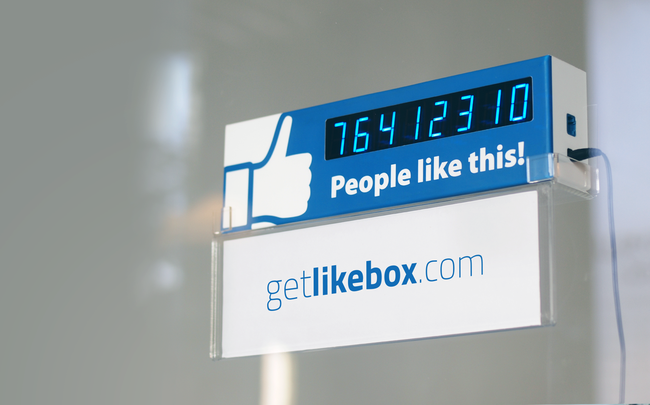 More than a year ago,  few young adults who had just finished their studies at the University noticed that there are many companies who use Facebook  but do not have the an opportunity to show  their popularity and love to fans outside a virtual world.

That was the origin of the idea to create Facebook ‘likes’ counter which will let business segments show their their number of fans on the streets, shopping centers or in inaccessible places. This device also gives the opportunity to show gratitude for joining them.

LIKEBOX idea turned into reality after a half of year and became one of the first social devices which stream number of Facebook ‘likes’  at any place where is the Internet connection.

Restaurants, bars, night clubs, clothes or food stores which use the unique device noticed that it encouraged customers to join their fan page. LIKEBOX creates a desire to see an increasing number in the device by pressing ‘Like’, and for those who haven’t become a fan yet create a desire to became one.

One of the first LIKEBOX owners in Lithuania is “Muzikos rūsys”. The bar manager said LIKEBOX instantly caused excitement. People were interested in increasing number. The number of fans increased quite quickly”.

LIKEBOX not only helps increasing the number of ‘likes’, but it is also easy to use. You just have to connect it to a computer by using LAN network cable and  configure wireless connection. Then disconnect the cable and LIKEBOX will work by using wireless internet connection. The device shows the number of fans at real time and uploads the date automatically. It’s the great opportunity to show people how many fans you have at the real time.