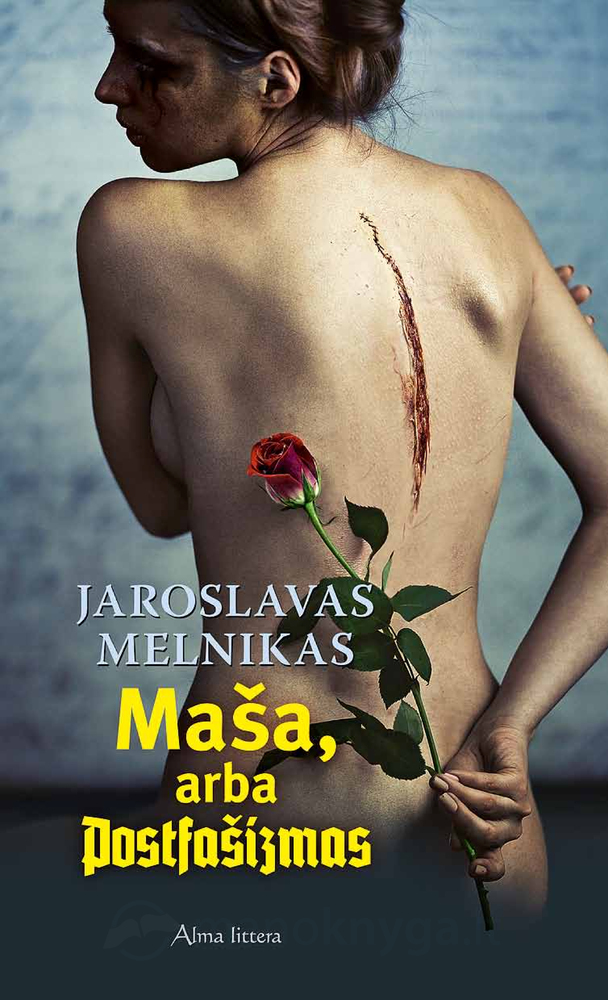 Yaroslav Melnyk – writer, literary critic, philosopher, mostly known for his book “The Paris Diary” which became the bestseller in Lithuania and his novel “Remote space”. In  a futuristic novel with a sharp plot titled “Masha, or the Fourth Reich”, which was described by critics as a “shocking work about Nazis and intense love”, author develops anti-utopian genre and analyzes the sins of humanity.

“It is a novel about love. But the background of the characters’ love is a brutal epoch during which they have to live” – this is how the author describes his newest piece of literature. There is nothing similar to the traditional model and about the relationships between man and woman. It is about a love for a human. For the one who is valued only when you doubt the world and its built truths. For the one whom you considered inferior.

39th century, Reich nation, perfect and the only country in the world where happy and free people live. It is not obligatory to have a job in the country of Reich. One can work for its pleasure, in order to keep relations with people, or, as character in the novel explains it, to have certain status in the society. In order to live and satisfy ones everyday needs, people ranch and farm. Stors, new created species of animals, help people. They live in barns and are being grown not only for the food, but also for the help when working in the fields and farms, chopping wood, or bringing buckets of water. Stors are irreplaceable helpers for owners, although this fact does not help them to avoid ruthless behavior with them: when stor is owned by a cruel master, if he behaves badly, stor is usually whipped and when he becomes too weak to do any task appointed to him, he is simply butchered. Everything is as it should be in the farms is portrayed there except for one thing – stors have human form.

If people could not talk, would not be able to cherish feelings, and would not stick to the certain rules of society but would have a body of a man or woman, would they be still considered as humans? Society in the novel “Masha, or the Fourth Reich” states that no, they would not be considered as humans if they would not follow previously described aspects. In order for a person to be called human, he or she has to not only look like one as the concept of a “human” is not just about the evidence of body. “Human, first of all, is a citizen of Reich, smart and cultured being, that has its own property, profession, family. Human is someone that has a humanly status” says one of the main characters in the novel, journalist Dmitriy Ogin. So to call stors animals and not humans is acceptable in this post-fascism society. On the other hand, there will always be people who will try to go against the common practice and reach to evoke human consciousness and their feelings in order to accept stors as humans and not animals, which they are turned into when owners lock them in barns and create conditions suitable for their animalistic instincts. Mesmerized by this “idée fixe” main character Ogin finally confesses to himself that he has warm feelings towards the stor living in his own farm, called Masha. Inspired by love Ogin understands that Masha and other stors are just unlucky people and he takes part with the defenders of them. Followed by various falls and rises, happy and sad moments, Dmitriy and Masha, protected by him, are going on a journey for the search of happiness.

Yaroslav Melnyk in the novel “Masha, or the Fourth Reich” tells a story about the year 3896 but he also states that the classification of “humans” and “animals” exists in these days too. “We are living in a world where there is higher and lower classes of people. Lower class is made to be inferior, just like in my novel. Humans, according to people in these modern times, are the ones that are enriched, have power. They are “humans”. Others – people of lower social class. What are we for them?” says author in one of the interviews and adds that he still believes in humans and their ability to revive, to come to their senses.

“Masha, or the Fourth Reich” – novel which overwhelms and makes one become more sensitive. Openly written and at the same time sharp story will leave thousands of thoughts in one’s head and will raise the consciousness in every reader.