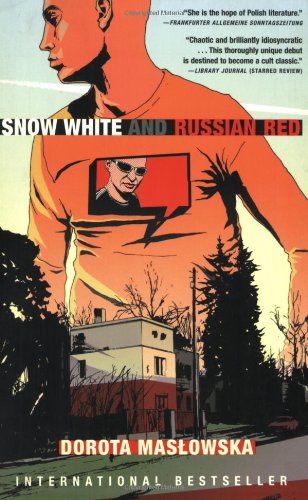 Typical apartment building of soviet times, bathroom decorated in gross green and white colored tiles. Black-haired girl leaned over a bathtub is throwing up stones. “Gentleman” standing next to her, who is wearing a sweat suit with two lines and a t-shirt, makes a sign of cross on himself because he does not know what to do in a case like this. And he does that sign not because he is a very religious man, it is just in case. Maybe it will help. You never know what kind of a demon possessed this chick. “OMG… A chick with a stone inside of her. And with something else. And I wanted her to be mine.” (p. 65) This is a scene from a movie filmed in 2009 and directed by Xavery Żuławski based on a novel written by Dorota Masłowska and titled “Snow White and Russian Red”.

Have you ever heard about the author Dorota Masłowska? Let me confess that when I hear something about Polish literature I have the classical trio in my head – Czesław Miłosz, Adam Mickiewicz, and Witold Gombrowicz. Besides being famous they are also linked together by being the children of early 19th-20th century. Although with the contemporary generation of writers, amongst who is Masłowska, the situation is a little bit different. Maybe we do not know these authors because publishing houses of our country do not introduce them to us? It can be said so when we look at the biography of this author. Only one book of hers is translated into Lithuanian language. Or maybe it is because her works are not worth reader’s time? Well… just keep up.

“Snow White and Russian Red“ is Masłowska’s first novel, published in 2002 when the author was only eighteen years old. Of course, you would say that age does not matter. However, writer Jerzy Pilch in the annotation of this book tells about the author that “for this young girl her maturity is typical together with an excellent control of Polish language – cutting, breaking, mashing it into some kind of porridge and from it creating her own style of speaking, usually frightening, infinitely risky and always personal and poetic”. He is one hundred percent correct! Especially about the porridge, that is frightening and risky speech. Secondly, in 2006 for her novel “The Queen’s Peacock” she won the NIKE Literary Award which is one of the most prestigious awards in Poland. She “defeated” such writers as Wisława Szymbroska, Ewa Lipska, or Adam Zagajewski. Later on her road to success reminded of Lithuanian writer Marius Ivaškevičius – from literature to dramaturgy, films. Her play “Everything is good” was directed by one of the most famous Polish directors Grzegorz Jarzyna. She was notices in Lithuania too. In 2012 Jonas Vaitkus together with Drama Theatre of Klaipėda made their own version of this play. What is more, in the same year film titled “Polish-Russian War under White-Red Flag“where a role was played by the author herself was included into the Vilnius International Film Festival “Kino Pavasaris” programme. Thereby works of this author are slowly entering Lithuania and if not through the literature, then through theatre and films.

Strongman phenomenon: lost generation of youth and why Russians?

The surface of the story is simple – through the eyes of utter nationalist, homophobic, racist, and anti-Semite (what a combination) person, with a nickname of Strongman, the life of province people, “lost” generation is being told. The technique of stream of consciousness, or to be precise, external drama, conveyed through swear-word injured intellect, where this lord of court lost was left by his girlfriend and also the coolest girl in town Magda. Luckily she is easily replaced by Angela. Unfortunately they do not have much time to get to know each other better when this girl locks herself in bathroom and starts vomiting stones… This is not some kind of a devil’s game. Physiological diagnosis of her “abnormal” (weakness) is reference to all of the traumas of the characters in the novel which touch more than just a body but consciousness, as a cracked identity of “I”, too.

Post soviet Poland (in this case we can write our own country’s name) is a land of people disabled by communism and now by pop culture dominating in television; land of people who are not so used to independent thinking, not used to choosing, and do not know what they should be doing in this world; land of people like Strongman who are hopeless even though they act very tough, unbreakable, see themselves as rulers of their yard, district. The matter is that they do not really want to change something in their lives. They simple cannot, maybe do not know how. And if you try and teach them to do that, they are not able to. That is why they are hopeless, powerless, just like that girl in the bathroom.

Why the novel is titled “Snow White and Russian Red“? Or rather where in the novel the war is portrayed? Even though there are some clues about the ongoing war, it remains just the background of the whole story, somewhere far away, like artificial, if we imagine war between two countries. It is “fictitious” because it is portrayed as some kind of a satire where Russians are blamed for everything. “Russians, falsifiers of CDs; Russians, ruining our farms; Russians, killers of our and your dogs; our kids, crying for Russians. Yes or no. Poland for Russians or Poland for polish people. Decide already, because when we are here blah blah blah, they are arming up.” (p. 95) Though when the word war is changed to a conflict, it happens every day; conflict with yourself, with others, family and strangers who left their humanity somewhere else. Is the conflict needed in the world of this literary work of Masłowska? Not really. Anarchy is in control. We do not need anything: rules, power, feelings, other people, etc. A little bit of fighting, alcohol, drugs, and everything else is better.

And because of the described negative atmosphere of this book, you should not fool yourself because when reading it, no dark thoughts and emotions should obsess you. On the contrary, in a lot of sections, that are not so funny and are more absurd, you will be smiling. Masłowska perfectly understands the thoughts of main character while at the same time controlling his incoherent but powerful stream of consciousness and little bit dirty vocabulary. In most cases works, written in this technique, are not read very easily. This novel is an exception.