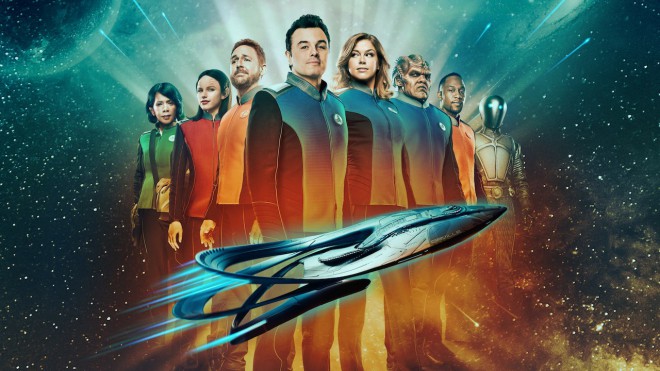 Seth MacFarlane – American actor, filmmaker and comedian is most known for his animated sitcoms like ‘’Family Guy’’ and ‘’American Dad’’, or the buddy comedy about a foul-mouth teddy bear ‘’Ted’’. However, this time we travel away from the modern quirky American families in MacFarlane’s most well-known works and board a space vessel, 400 years into the future.

‘’The Orville’’ is a sci-fi comedy-drama series surrounding the expeditions and various missions of the captain and crew aboard the Orville. It features the many lifeforms that make up the galaxy in the 25th century, from single gendered, egg-laying species; androids who feel biological lifeforms are inferior to them; talking gelatinous lumps and many more weird and wonderful creatures.

This show is heavily inspired by ‘’Star Trek’’ and its earlier days with the usual space adventure elements – the ship, the high-tech gear, even the colour block costumes that are reminiscent of those worn by ‘’Star Trek’s’’ USS Enterprise crew. It’s whimsical to see the futuristic inventions many of us would love to get our hands on today, like the machine that makes anything of your desire appear out of thin air, or a hyper-realistic VR game.

MacFarlane has been confronted by some critics about the similarities between ‘’Star Trek’’ and ‘’The Orville’’; they are quite similar to the point that ‘’The Orville’’ is veering on the line of being called a piece of ‘’Star Trek’’ fanfiction. The director stated that his show was simply following the footsteps of ‘’Star Trek’’ as a he misses the ‘’forward thinking, aspirational, optimistic place in science fiction that Star Trek used to occupy.”

Each episode is made up of individual exploratory adventures, mishaps and misfortunes that the crew must work together to overcome with pieces of regular, domestic life on the ship taking up a good chunk of the show. Our main characters must deal with mutual struggles that are more down to Earth and relatable – marriage, work, family. It is evident that even 400 years from now, people on an inter-galactic voyage must deal with mundane problems.

It is a light-hearted and optimistic piece of science fiction, well-doused in casual, sometimes hit and miss humour that is usual in MacFarlane’s works. The comedic factor does heavily depend on the viewer’s personal preference and on whether they enjoy MacFarlane’s brand of humour – something that many viewers and critics love to hate. Of course, ‘’The Orville’’ seems more toned down, less risqué, than much of MacFarlane’s other, more controversial works, even though it contains its own fair share of eyebrow-raising moments.

‘’The Orville’’ isn’t a spoof of ‘’Star Trek’’ or just an empty, sunny comedy – it has some thought-provoking and deep parts to it. Although primarily keeping its focus on the wacky space adventure aspects, the show deals with many topical issues such as gender norms, transgender problems and religion throughout the episodes. Such topics can weigh down many comedies and make them appear like they are going off on a tangent and thrusting a deeper meaning at viewers, but ‘’The Orville’’ still manages to retain its humour by delivering its serious messages in an easy and entertaining way.

As MacFarlane said at the Television Critics Association press tour ‘’in this day and age when we’re getting a lot of dystopian science fiction, a lot of which is great and very entertaining, but it can’t all be The Hunger Games. It can’t all be the nightmare scenario’’, meaning that not all sci-fi should opt to travel town the fatalistic route, some should show a positive future.

Overall, I find that ‘’The Orville’’ is a sincere and feel-good show. It may have its fair share of weird and wonderful; it may not be everyone’s cup of tea, but for me, it is a funny show if you’re looking for something enjoyable and playful to watch.