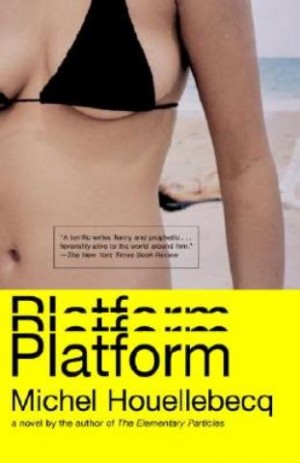 Controversial French writer Michel Houellebecq examines the issues of individuality, depreciation of love, travels through exotic countries and dependence on sex in the novel “Platforma”.

Beginning of the novel is traditional – a small event, which gives start for further steps. Father of the main character Michel is dying and son comes to say goodbye. After the funeral, the main character decides to go on holiday to Thailand. Michel has no friends, so a lot of time he spends alone. He loves to see the people round about. Thinking about others, he often remains critical. The main character is characterized by a sense of individuality. Communication and meeting with new people, it is not very important for him. The man often tries to remain a spectator, although he likes to relax in the evenings. Visits at night bars or in massage parlours is one of his hobbies. In these places he can find the pleasures of the body and avoid making the acquaintance of somebody, which Michel likes very much. Therefore, sometimes it seems that this man gives up too quickly to feeling of loneliness. The only way to dispel this feeling – wandering at night bars.

A trip to Thailand is unique for Michel because in that trip he meets a new person. Valeri is discovered friend, the only person with whom the main character not only enjoys sex games, but also, establishes the connection. This is the first step to lifestyle changes of Michel.

The second chapter of the novel is different: more experiences of the players, more passion, emotions, and less watching. Besides the continuing friendship between Michel and Valeri, another important character – Valeri’s colleague Jean-Yves occurs. These three actors come up with a new project – sex tourism, which they are trying to implement. Characters of the book – is the followers of new idea’s and life’s goals. They are persistent, determined, and they all want that each person in their lifetime could feel more pleasures and memorable moments. Therefore they conclude that the project of sex tourism in the agency will be very profitable. After all, everyone wants entertainments in its owns journey. Time of the travel is limited, but when everything is planned, the evening remains free to satisfy personal desires.

To ensure success of the project Valeri, Michel and Jean Yvu go on a trip to Cuba. Valeri and Michel are fascinated by this exotic land, so they decide to stay. They are connected with a great love, passion, understanding … They sometimes talk about a common future, and even children. The couple choose to live on their own desires, personal interests, wills, and not due to a better future in economic aspect and success of the career. In the whole novel Michel is portrayed as highly intelligent person who reads a lot. He likes facts about politics, history, and economics. He reads best sellers, sometimes magazines. By travelling in the temples, he is interested in the history of India, even though he is European from France. “Thirty-six lords of Ayutthaya one after the other during their ruling period built Buddhists’ temples and palaces. As French and Portuguese explorers write, Ayutthaya was the most beautiful city in Asia in 16-18 centuries.” (p.72). His thoughts turn to how much Thai craftsmen have put strength in the work to build what tourists now can see and and locals can admire.

This book is really interesting, although sometimes it seems that the French writer too meticulously trying to convey emotions which the characters experience. The sex is very common. Sex scenes described meticulously, vividly, frequently. Sometimes it seems that the author is trying to convince the reader that only the sensual pleasures of human life worth to living. Business’s project highlights the persuasion that important subject remains the sex.

The novel attempts to reveal the dual truth (good and bad) of life for the reader. Good reveals itself through the values ​​and feelings that a person can experience: desire for love, pleasure, adventure, the importance of interaction. The bad truth shows that not everything could be so easily achieved and endured.

Sometimes a person has to spend a lot of time by searching, watching, suffering, trying to understand the world, and conflicts in it.

In this history different things can be noted: the strong and enthusiastic people, a lot of experience, tender and passionate moments, also criticism and sadness. Character’s life is in some ways similar in today’s human world. Everyone wanders through it, in order to discover something memorable and enjoyable in life. Therefore, anyone who wants to experience this has the opportunity to read this book.