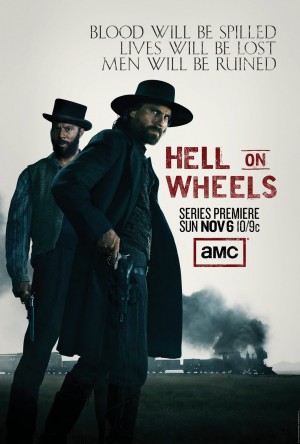 And now ladies and gentleman I will tell you horrible story in which blood will uncontrollably pour to all sides, people will lose their family, property, honor, life and everything that is precious for them in this world.

That story happened long time ago, 1865 straightaway after USA civil war ended. After incredible mass slaughter, when because of future life model people grappled for that opponent of dispute just will not remain and nobody cared about fighting techniques or measures, after that cruel and merciless civil war there was left many accounts. It is sad, grim, revenge and hopelessness permeated story.

Well, maybe everything is not so bad. Probably I will not tell everything so cool and assuredly as this story tells AMC television serial “Hell on Wheels” about lonely avenger of Wild West who lost everything. Leave this troublesome job for him. I will tell just few words – this serial is worth a sin, that is to say, watching it. The action develops in one despicable fraudster and intriguer managing Railway Company. In which, his own interests led, employs already mentioned lonely prairie cowboy Cullen Bohann. In this story except revenge there is a lot of interesting lines – racial equality origins story, religious conflicts and of course love, how did without it.

Strange how “Hell on Wheels” creators with minimal financial measures and thanks to particularly commercially smart script was able to recover so aptly the Wild West. I have heard that all the medical serials as House “M.D.”, “ER” and etc. Boom based on that hospital decorations low cost, but here is upon the whole. Good sorts film makers created breath taking, absolutely addictive western with one steam engine, prairie and a few tents help. All the attention is taken to acting, action and dialogues. I will not say much about characters but if you watch, take a look at one gloomy, distinctive look northerner. I promise that you just couldn’t take your eyes of him, whenever he appears. So, the evaluation…

Originality: in childhood I haven’t read such novels for boys as “Winnetou” or “The Great Train Robbery” so it is hard to decide how much this story is original. But there is no doubt that serial is different from others. 4/5

Plot: love such things which you can‘t deduce beforehand. In this serial there really is such things. Characters are bright, not stereotypical, motivated. 4/5

Atmosphere: one of the main “Hell on Wheels” beauties is blacks position after civil war. A lot of the films depicted slavery, lot of them new age problems, but here is hijacked really little studied period. It enchains attention. 4/5

Satisfaction of the view: if you are not afraid of dour, muscular, sweat, gunpowder and iron-like men this story is created for you. 5/5