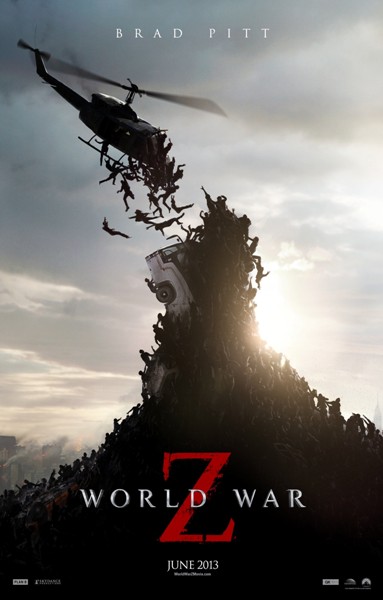 Movies about zombie’s invasion are constantly being made. Therefore, in order to make the zombie movie original, something impressing needs to be done. Anyway, it looks like Marc Foster has done his best.

The movie is definitely full of action. Action and panic. The peaceful moment last just for a few first minutes of the movie and after that the viewer can enjoy the adventures of Indiana Jones with “Apocalypse” elements and a little bit of taste of “28 days after”.

So, what is happening?

The earth is flooded by zombies (for some reasons in the movie they are also called Zigs, maybe it is just army’s circle jargon) which are destroying cities one after another and people are just panicking and shop lifting. Nothing new yet. But there the hero appears – Gary Lain (actor Brad Pitt) who is not just killing zombies with the hope that he can deal with them just by using force (if you are strong, you don’t need brain). The most important thing is to find the heart of the virus and after that to create a vaccine. So, Gary with a small crew and totally lame scientist, who shouldn’t have left his books and laboratory, are going to find the heart of the pandemic. The adventures are starting.

Successful movie adaption of the book

“World War Z” is based on the book of the same name by Max Brooks. Max Brooks’ “World War Z” remains one of the best pieces of zombie fiction ever produced, effectively a short story anthology set amid a zombie apocalypse with a global scale. The question is did Mark Foster succeed to create one of best movie about zombies?
Even this movie is not as exclusive as the book we must keep in mind that Brooks wasn’t hampered by budget or populism or by age ratings. Meanwhile Mark Foster has faced these problems. The troubled production had been widely reported with the release date being pushed back followed by the reports of the multiple re-writes. Despite that Mark Foster created a really promising movie which is put together quite reasonably. And if you are not a big fan of zombies’ you will be surprised by the memorable special effects.

The hero who is not afraid to cry

Despite the fact that this hero is a little bit tardy and idler, it is very nice to see the hero who has emotions. Yes, maybe the person who noticed how virus spreads should be able to see a can of lemonade. And yes, maybe the man who understood why zombies don’t attack certain people should silence his mobile phone while he was on a mission where the most important thing is silence but who doesn’t make wrong choices?

So this hero makes mistakes but this just makes him more adorable. He outruns the typical macho list – “Am I not a cool guy?” The fact that this man starts to cry when he realizes that his family can be in danger makes him human. The viewers want to identify themselves with this kind of human.

Brad Pitt obviously did his best and looks like he felt every moment of the movie. However, it looks like other actors decided that there is no point in trying because Brad Pitt will take all the praising anyway.
There are no necessary dribbling dialogs, elongated crying scenes or emphasis on the obvious things. The family is important because it is family. Sacrifice is important because the survival of the team is more important than the one person. You can’t save all. Everything is clear, fast and enjoyable.

Even if this movie gives some new insights and ideas it can’t be called a masterpiece. It is hard to say what exactly this movie lacks. Maybe it would be useful if this movie would open the secret of pandemic heart. Now it looks like the creators just couldn’t figure something interesting out and just decided to hush the idea of finding virus’s heart. But wait, maybe they are creating the second part of this movie and we will find the answer in it?
In general, this movie isn’t bad and made a good impression. And even if you didn’t expect much from this movie you will be pleasantly surprised regardless of being a fan of zombies or not.